Banaue is widely known as the location of the UNESCO World Heritage Sites namely: the Batad Rice Terraces and the Bangaan Rice Terraces.
The spectacular Rice Terraces were carved into the mountains of Ifugao in the Philippines by the ancestors of the indigenous people.

Banaue, a municipality in the Cordilleras of Luzon island, is widely known for its impressive Rice Terraces that were carved into the mountains by the ancestors of the indigenous people Ifugaos.

The 2,000 year old Banaue’s Rice Terraces, commonly referred to as the “Eighth Wonder of the World”, were made largely by hand with the use of minimal equipment. Until this day, locals still plant rice and vegetables in the terraces.

The Hapao’s Rice Terraces is a stone walled man-made creation that stretches far and wide and dates back to 650 A. D. Both Hapao and Banaue are some of the five rice terraces in Ifugao that has been included as a UNESCO World Heritage Site.
Hapao is an awesome destination for trekking through the rice terraces and relaxing at the natural hot spring that is found in the area.

Those who go to Banaue, can take the opportunity to visit the unique burial site in Sagada, where the local people used to hang coffins with their dead down a cliff. The Sagada people have been practicing such burials for over 2,000 years, and some of the coffins are well over a century old.
The position of a coffin signifies how much their loved ones cared for the deceased – the higher thedead were placed, the greater chance for their spirit reaching a higher nature in the afterlife.

The distance between Manila and Banaue is about 300 km. The road is paved all the way to Banaue. Travel time can be as long as 9 hr due to the several blind curves through the mountains.
The nearest airport to Banaue-Rice-Terraces is Cauayan (CYZ) Airport which is 74.5 km away (about 4 hours drive).

The best time to visit Banaue is from December to February when the rainy season has ended and the weather is still cold. The summer season from March to May is also good and the temperature is warmer.
Be ready for the rain if you travel between June and November. 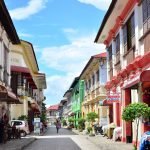