Meet the red “People of the forest”. Orangutans are Asia’s only great apes with one species found on the island of Borneo and the other on Sumatra 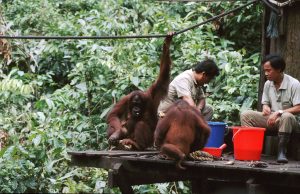 Sandakan is the second most important city of Sabah with a population of nearly 300.000 inhabitants. Sandakan is also known as the former capital of Sabah and its name evokes Sandokan, a fictional pirate of the late 19th century known throughout the South China Sea as “The Tiger of Malaysia”.

Sandakan has long been associated with prosperity and wealth as it is historically renowned for pearls, sea cucumbers, birds’ nests and timber. In the mid-1930s, the timber export reached the record, making it the large timber-exporting port of hardwood in the world. At that time Sandakan boasted that it had the highest concentration of millionaires anywhere on Earth. Nowadays, Sandakan is known as the gateway for ecotourism destinations in Sabah, such as the Sepilok Orangutan Rehabilitation Centre, the Turtle Island Marine Park, and the Kinabatangan River.

The world’s famous Orangutan Sanctuary is just 30 minutes away from Sandakan city centre. The site is 43 sq km of protected land at the edge of Kabili Sepilok Forest Reserve. In 1964, the reserve was turned into a rehabilitation site for great apes and today around 20 young orphans are housed in the nurseries, in addition to those free in the reserve. The target of the conservation project is to return orangutans kept in the centre to the forest.

Although there is a high possibility of seeing orangutans during the feeding time, wildlife sightings cannot be guaranteed as they roam freely in the forests.

From the entrance, visitors walk for about 10 minutes through the jungle until the feeding platform. The orangutans are fed twice daily(morning at 10.00 and afternoon at 15.00) by park rangers at this special feeding platform. The food consists primarily of bananas, sugar canes, and milk. The feeding platform is the last phase of the rehabilitation process. Here most of the animals eventually achieve total independence and become integrated into Sepilok’s wild orangutan population. Generally, they become total independent after 6-8 years of training.

The rehabilitation progress starts after an orphan orangutan has been admitted to the centre. A general health examination upon arrival is followed by a quarantine period of 3-6 months. After quarantine, orangutans will be trained to give them the essential skills to live in the jungle, such as the ability to climb trees and build nests. After the training period, orangutans are given increasing freedom and at the same time encouraged to learn to fend for themselves. When orangutans have totally adjusted themselves in the forest and show signs of independence, there are gradually moved to the last phase of survival training: the feeding platform.

Ultimately, the goal of rehabilitation centre is for orangutans to return to the wild.

Barbara Harrison, the wife of the curator of Sarawak Museum, started the Sepilok Rehabilitation Center in 1964. Since then, more than a hundred orangutans have been successfully released. 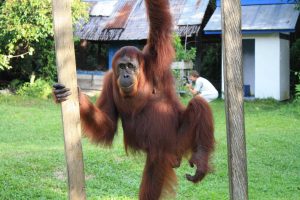 Pangkalan Bun in Central Kalimantan, Indonesia is the closest town for entry into Tanjung Puting National Park, one of the last remaining refuges for an orangutan in the wild. The journey continues to the port of Kumai to board the wooden riverboat “klotok’. The boat’s name refers to the noise it makes: “klok tok tok tok”.This traditional river boat is the best possible means of transportation in this remote area.

The klotok cruises up the Sekonyer River into the heart of Tanjung Puting National Park. During the cruise, the visitor might spot a group of proboscis monkeys also called “orang belanda” (Dutchmen), as Indonesian remarked that the Dutch colonizers often had a similarly large belly and prominent nose.

After spending the night on the boat, the journey continues to Camp Leakey.

Camp Leakey was established in 1971 by Dr. Biruté Galdikas. It was named after the legendary paleoanthropologist, Louis Leakey, who was both mentor and inspiration to Dr. Galdikas.

Dr. Galdikas is a scientist who studied for decades the orangutans in Indonesia and today she is the world’s foremost authority on the orangutan.

In 1971, Galdikas and her then husband, Rod Brindamour, arrived in Tanjung Puting Reserve in Indonesian Borneo. There were no telephones, roads, electricity, television, or regular mail service at that time. Despite the primitive conditions, and hard work she set up Camp Leakey. Four years later, she wrote the cover article for National Geographic Magazine, bringing orangutans widespread international public attention for the first time.

All the orangutans at Camp Leakey have been kept in captivity for several years and nowadays they become very familiar with the visitors. But need to be careful because orangutans are very strong primates that can grab bags or cameras. In a tug-of-war, they will win.

Orangutans primarily inhabit peat swamp forests, tropical heath forests, and mixed dipterocarp forests at altitudes of less than 1,000 meters above sea level. Orangutan population density has been shown to correlate positively with the level of fruit availability. This means that in forests where a higher abundance of fruit and fewer or less drastic periods of seasonal fruit shortages occur, orangutans are found to live at much higher densities than in other forests.

The destruction and degradation of the tropical rain forest, particularly lowland forest, in Borneo and Sumatra is the main reason orangutans are threatened with extinction. At one time the world’s wild orangutan populations likely included upward of hundreds of thousands of individuals, but current estimates indicate far fewer wild orangutans now remain. During the past decade orangutan, populations have probably decreased by 50% in the wild.

Visit Tanjung Puting National Park before the rainforest disappears, but don’t complain if an orangutan pinches your backpack. After all, humans have been stealing their land for years, and it’s about time they got their own back. 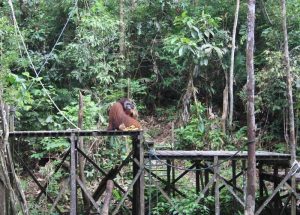 The Semenggoh Nature Reserve is about 30-minutes drive from Kuching in Sarawak. Although the conservation project at Semenggoh has begun many years ago, Sarawak forestry has declared it nature reserve just recently.

Currently, there are about 20 orangutans in Semenggoh, but the number is increasing due to the major threats such as habitat loss and illegal pet trade. New palm oil plantations are taking over in Borneo and Sumatra, resulting in adult orangutans being slaughtered either by guns, machetes, wooden stakes and even fire, and their babies either kept as pets or sold to wildlife dealers. The rescued babies are taken into care by the rehabilitation centers where they will learn the survival skills.

Visitors treks five minutes through dense tropical vegetation until the feeding platform. As the rangers reach the platform, orangutans descend from the trees to eat. Sometimes visitor might spot Mr. Ritchie, the eldest orangutan and dominant male of Semmengoh.

Adult males can reach 1.5m in height, weigh as much as 120kg; they are also fourth times stronger than humans.

When you stare into an orangutan’s eyes, the gap between ape and human vanishes. Orangutans share 97% of their DNA with humans and they are able to mimic several human-like facial expressions and communicative postures. On average, orangutans may live about 35 years in the wild and up to 50 years in captivity.

CAMP LEAKEY : From Pangkalan bun proceed for about 30 minutes drive to Kumai port. Then proceed by klotok river boat to Camp Leakey 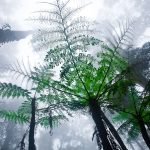 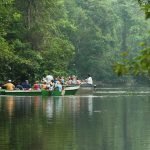 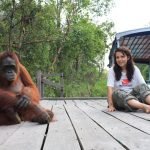 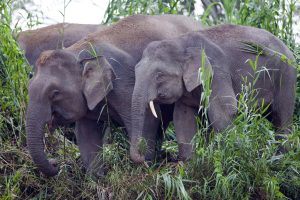 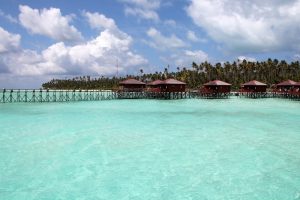